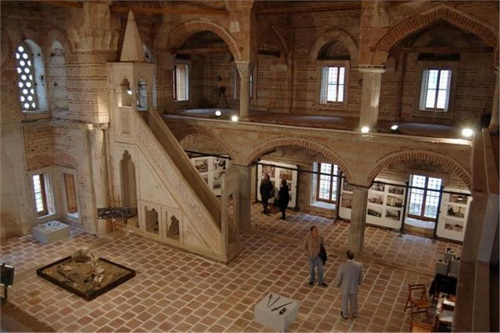 A 15th century Ottoman mosque in the northeastern Greek town of Didymoteicho was damaged Wednesday when a fire broke out during restoration work, local officials said.

"For the moment there is no indication that arson was involved," Nathanail Rigas, head fireman of the Thrace region bordering Turkey, told AFP.

Reports said the roof had been entirely destroyed.

It took more than 50 firefighters to tackle the fire.

Local police said that a smaller fire had broken out on Tuesday -- reportedly during welding -- and had apparently been extinguished, but likely flared anew.

There was no work underway when the fire broke out around 0100 GMT, the mayor said.

Initiated under Sultan Bayezid I and named after him, the mosque -- a cultural monument not in use for prayer -- is considered the largest in southeastern Europe and of unique architectural and historical importance.

The Greek region of Thrace has a Muslim minority of Turkish origin numbering around 100,000