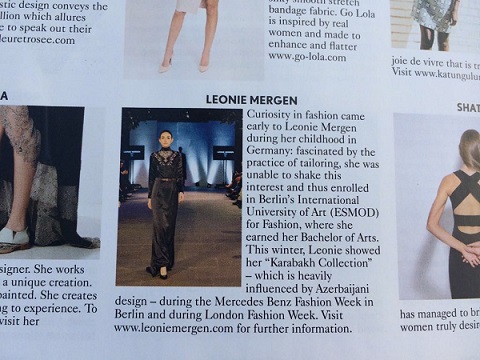 Press Release: Berlin-based Leonie Mergen is one of the foremost rising German designers. Having studied at the International University of Art in Berlin and interned at such high-end houses as a Patrick Hellmann in Berlin, her fashion features a rich and inspired mélange of the traditional and the avant-garde, all executed with European finesse.

Axar.az reports that earlier this year, her A/W 2017 range was unveiled to an expectant public – firstly at the Mercedes-Benz Fashion Week in Berlin, then at London Fashion Week, where it stimulated an interest from the fashion media. Entitled the Karabakh-Collection, the range takes its point of departure from the Azerbaijani Karabakh region, an area of the country that is synonymous with Azerbaijani culture and artisanship, yet has remained under illegal Armenian occupation for a quarter of a century.

The success of the collection has now resulted in Leonie being featured in the Designer Profile section of the September edition of British Vogue. This comments on her background and features one of the most stunning looks from the Karabakh-Collection, exquisitely executed in delicate silk, and follows the hosting of footage from the London runway on the magazine website.

This edition of British Vogue is particularly important, as this is the final edition to be edited by Alexandra Shulman, the editor for 25 years. With an estimated circulation of 22,000 and one million readers, 85 per cent of British Vogue readers agree that: “Vogue is the Fashion Bible.”

See www.leoniemergen.com for more information and to see the Karabakh-Collection.