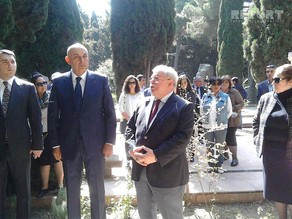 It was told by the Union Chairman, People's Artist Azerpasha Nemat.

According to him, the book will be published in 3 languages - Azerbaijani, English and Russian: 'A new book, dedicated to the memory of Nasiba khanim will be published. Currently, Theatrical Figures' Union carries out final completion works. After completion of the works, Theatrical Figures' Union will hold a solemn ceremony and present the book to theater community'.