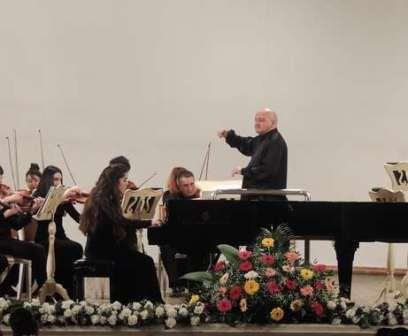 The event was organized jointly by Azerbaijan State University of Culture and Arts and National Philharmonic.

The musical evening began with a performance of "Cantata No. 142" (in four parts) written by J.S. Bach.

Another laureate of international competitions, Sabina Mexdiyeva together with orchestra conducted by Russian pianist Mikhail Petukhov performed a work by F. Liszt "Spanish Rhapsody" in transcription for piano and orchestra.

In the end, Azerbaijani pianists Rashad Kazimov and Leyla Aliyeva performed " Concerto for 2 pianos and orchestra in C minor" by J S Bach".

The music program was enthusiastically received by the audience, the soloists amazed the audience with their performing skills. Thunderous applause reverberated from the auditorium as the show ended.