Azerbaijani producer will be a jury member 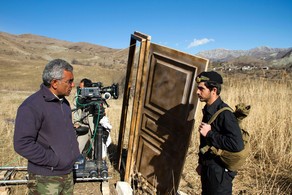 Azerbaijani producer Elchin Musaoghlu will be a member of jury at 8th TRT Documentary Awards Festival, which will be held in Istanbul on May 12-16.

It was told in the 'Azerbayjanfilm' studio.

Notably, Elchin Musaoghlu's 'The 40th Door' (40-ci qapi) and 'Nabat' full-length feature films have been presented at the most prestigious film festivals around the world and won a number of awards.