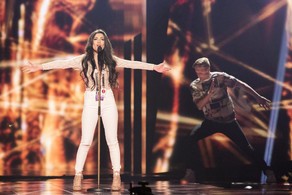 Representing Azerbaijan in the "Eurovision-2016" Samra Rahimli held the first rehearsal on the stage of the competition in Stockholm.

"I am so excited to see the big stage finally," said the Azerbaijani representative before going on stage.

Samra will be accompanied by four dancers, who practiced their choreography just behind the singer. Samra will also be supported by a backing vocalist, Diana Hajiyeva.

"I want my fans to see and experience my entry on stage, not just to describe it", the singer explained and promised to create a miracle during her performance in the Globe Arena.

This year's Azeri entry is directed by Roine Söderlundh, who worked the Azerbaijani delegation in 2009.

According to the director, the Azerbaijani act is based on the story of "Alice in Wonderland" but with a modern and futuristic approach to the novel: "Samra's dancers could be associated with the surreal Wonderland of broken relationship and at the same time they help build up the energy of the performance," Söderlundh explained, "Miracle is not only about a broken relationship, but also about healing. We aimed to create positive warm feelings around the song and give some hope to the viewers."