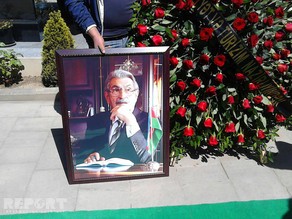 Public representatives and family members of the deceased attended the funeral ceremony of the poet, who has died on May 4.

Notably, Sohrab Tahir was born in South Azerbaijan in March, 1926 (according to official documents on August 6).

He was awarded 'Glory' order in 2006 in accordance with the order of the President of the Republic of Azerbaijan.