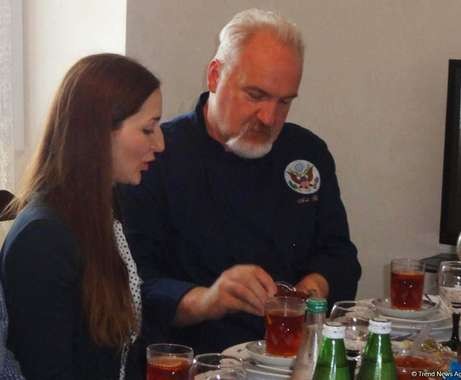 Famous American chef Art Smith has visited the Land of Fire within America days festival in Baku, organized by the U.S. Embassy in Azerbaijan.

Art Smith has cooked for world leaders and many star personalities, who are the family of U.S. President Barack Obama, television host, producer and social activist Oprah Winfrey, singer Lady Gaga and many others.

The chef came not only to present a variety of American cuisine, but also to get acquainted with the rich Azerbaijani cuisine and learn how to cook famous Azerbaijani dishes as "Buglama" and "Kebab".

During his visit, the guest visited Baku City Garadagh District and met with refugees from the Armenian-occupied Lachin region of Azerbaijan.

The town of Lachin with 120 villages was occupied by Armenian separatists on May 18, 1992. As a result, 264 Azerbaijani soldiers and civilians became martyrs and 64,000 Azerbaijanis became internally displaced persons. Armenians destroyed 133 large and mid-size industrial and agricultural enterprises, 20 health centers and 217 cultural facilities, nearly 40 cultural and historical monuments.

The meeting was also attended by the head of Department on public relations of the Embassy of the USA in Azerbaijan Steven Geis, Embassy officials, and media representatives.

Addressing the event, Ismail Agayev, IDP from Lachin thanked the Azerbaijani President for the facilities provided to refugees.

"Our president always fulfills his promises. In 2003, when he came to power, President Aliyev promised to liquidate the tent camps. He did it. The camps are buried in the archives of history here. This is a great breakthrough, and we believe that with the political will, the wisdom, and the ability of our president, our occupied lands will be liberated,” he said in a meeting held in a pleasant and friendly atmosphere.

Further, Art Smith, Stephen Geiss and other participants of the meeting were invited to the house of the resident of the village. According to national tradition, first of all the guests drank tea with different kinds of jam, honey and national sweets - shekerbura and pakhlava.

The guests were informed about Azerbaijan`s custom of tea drinking which is considered a symbol of hospitality and respect for guests. After that, the American guests enjoyed the Lachin pilaf.

Then, amateur cook of Azerbaijan Mushfig Dunyamalyev invited the chef to his house, where he showed the tricks of cooking Azerbaijani dishes to the world-known chef.

Sharing his impressions, Art Smith said he was delighted by the hospitality of the Azerbaijani people. He also spoke about American cuisine, famous personalities he worked with.

Saying goodbye to an American guest, the villagers expressed the hope for the next meeting with Art Smith in Lachin.

Dolma – one of Baku’s most delicious foods, which encourages excessive consumption. Dolma is made of fresh meat wrapped in grape leaves, that is served with a sour milk and garlic sauce. You should always be aware of the variations of dolma, which might include cabbage and tomatoes, or eggplants and sweet pepper stuffing.

Pilaf is another highly addictive dish. Although it is not easy to prepare real Azerbaijani pilaf, you can eat anywhere in the world, so be careful with the desire to prepare it at your home country. Pilaf is rice with meat, dried fruits, fresh herbs, or vegetables. There are many variations of this dish.

Levengi is will drive anyone crazy at first taste. Levengi is chicken and fish stuffed with walnuts, onions, sweet and sour dried fruit, such as plums, prunes, raisins and cherry plums. Admit, it is already sounds amazing, right! Just wait until you try it. We definitely recommend you avoid this one during your stay here in Baku.

Kabab is a desire of every foodie. The Caucasus is famous for its kabab, and in Azerbaijan the art of making kabab is jaw-dropping. You will literally not stop, I tell you, until you consume last scrap of meat. Accompanied with Azerbaijan’s famous fresh, juicy tomatoes, cucumbers, eggplants and sweet pepper, this dish is heartwarming.

Think twice if you’d like to taste another masterpiece of Azerbaijani cuisine – Piti. This soup is best served in the northern region of Sheki, but you can also enjoy its captivating aroma in Baku. The unique soup comprised of meat and vegetables is prepared for hours, and in the end, you have only to close your eyes, open your mouth, and, well, try to stay sane.

At this point down the list, you should be restless, but here comes the kings of addiction: Qutab and Ayran. These two are often paired to overwhelm your taste buds for sure. Qutab is sugarless flour pancake stuffed with anything from meat, cheese and herbs to pumpkin.

Qutab is traditionally washed down with ayran, a cold yogurt beverage mixed with salt and herbs. However, ayran can also accompany other meals in Azerbaijan, especially in the summer.

Desserts are the last but the most addictive dishes in Azerbaijan. People cannot stop eating pakhlavas, shakarbura and preserves. All of these, served with full flavored tea are sheer heaven for sweet tooth.