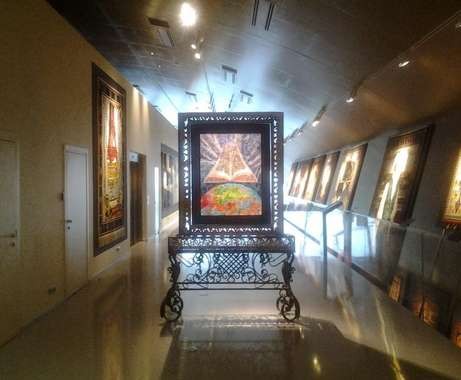 Boulevard Hotel Baku has presented one of the most impressive and inspiring series of art works.

The work "Secrets of the Universe" was made small pieces of glass by the specialists of the company "Glassi", Day. az reported.

This unique work of art is distinguished not only by the depth of the plot, but also its original technique. The painting is made of colored glass chips with a size of up to 1 - 3.5 mm.

The technology for creating this masterpiece suggests the absence of any traditional methods of assembly. The painting was created with the use of modern technology.

The author of these paintings is the founder of the company Glassi, Namik Safikhanov.

Since the presentation of the first painting "God is one and all the people in the world are brothers" (2014), all necessary stages to confirm the legal basis for fundamental innovations in the field of modern art had been exhausted.

The process of creating is quite complicated and laborious. Sometimes it takes a few months to create such kind of paintings. The end of 2014 featured amazing paintings such as "God is one and all the people in the world are brothers" which is stored in Azerbaijan Carpet Museum,"Good and evil" in a private collection, as well as "the Secrets of the Universe" that has been displayed at Baku Boulevard Hotel.

The main material used in creating these paintings is colored glass chips that are selected with tweezers and fixed on a special thin transparent film, excluding damage. Eventually the glass turns solid, both sides of which are equally good. All paintings are created by hand professional team of artists, designers, engineers and architects.

Such fascinating art works can survive the time and even after many millennia to please the eyes of future generations. They can be kept both indoors and outdoors under all climatic conditions.

"The price of vehicles for very important persons (VIP) ranges somewhere between $300, 000. It is the starting price for our artwork. But unlike machines, whose value is reduced by 50 percent almost from the moment of purchase, due to its exclusivity and uniqueness, the price of our work with each decade will only increase," said Glassi CEO Elkhan Asadov.

Director of the company also shared their plans for the future.

"In a short period of time without any advertising, information and sponsorship we anchored on the Azerbaijani market. In the near future we are planning to go beyond our country, in particular, we are thinking to enter into such a reputable organization like UNESCO," he said.