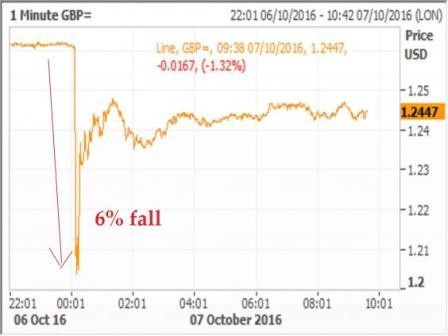 The Bank of England has confirmed that it will investigate the cause of a sharp fall in the value of the pound, which plunged in mysterious circumstances in overnight trading in Asia.

The news of the investigation came after the pound suffered a jarring flash crash on Friday, nosediving more than 6 per cent against the dollar in a matter of minutes.

“We are looking at the causes of the sharp falls over night,” the Bank of England said in a statement.

The pound fell as much as 6 per cent to $1.1841 – the most aggressive move since the results of the Brexit vote emerged in June – before recovering to $1.24 against the dollar.

“It was just another quiet day in Asia, and then, Bang! All the lights went red,” Matt Simpson, senior market analyst at ThinkMarkets, told CNN.

There was speculation a technical glitch or human error had sparked a rash of computer-driven orders.

Naeem Aslam, chief market analyst of Think Markets, said the fall was an indicator of how low the currency could still go.

“What we had was insane – call it flash crash but the move of this magnitude really tells you how low the currency can really go,” said Naeem Aslam, chief market analyst of Think Markets, in a note, according to Bloomberg.

“Hard Brexit has haunted the sterling,” he added.

One of the theories surrounding the mysterious flash crash include the publication of a report by The Financial Times.

In the report, French president François Hollande said Britain must suffer the consequences of leaving the EU and the EU must demand a tough stance when it negotiates an exit.

Su-Lin Ong, a senior economist at RBC Capital Markets, said: “The move coincided with an FT story about French president Hollande demanding tough Brexit negotiations. The move was exacerbated once stops were tripped below a key level of $1.2600 in very thin trading before the US payrolls.”