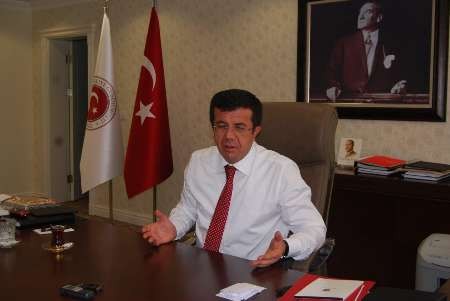 Axar.az reports that, he made the remarks while talking to IRNA Friday night before leaving here for Tehran at the head of a ranking delegation.

He stressed the need for implementation of the agreement on preferential trade between Tehran and Ankara.

He noted that the agreement on preferential trade between the two countries which was signed in January 2015 entailed discounts on customs tariffs on 125 items.

He said the agreement served to encourage more diversity in trade and economic exchanges in economic and trade relations between the two countries.

According to the minister, some of Turkish commodities which enjoy the discount in customs tariffs include auto parts, detergents, medicines, beauty products, plastic goods, forestry products, textile, clothes and clothing, furniture, steel and iron and some of household appliances like refrigerators, dish washers, cooling systems and electric goods.

Zeybekci noted that his country intended to increase the number of goods entailed in preferential trade agreement to 200.

Outlining the overall process of trade and commerce between Iran and Turkey, he said Turkey’s exports to Iran rose by 43.1 percent in 2016 while the total volume of its exports during the time suffered a 2.7 percent decline.

He stressed that many Turkish entrepreneurs were interested in doing business and making investment in Iran.

The Turkish minister further said that during his stay in Tehran, he will meet with Iran’s Minister of Communications and Information Technology Mahmoud Vaezi who heads the Iranian part of joint economic commission.

He expressed happiness over the fact that both countries enjoyed positive views and firm will in expanding economic and trade relations.

The Turkish minister is visiting Iran on the official invitation of the Iranian Minister of Industries, Mines and Trade Mohammad Reza Nematzadeh.

He is to confer with Vaezi, First Vice President Ishaq Jahangiri and Minister of Roads and Urban Development Abbas Akhundi.

He will also tour the Turkish trade center in Tehran.