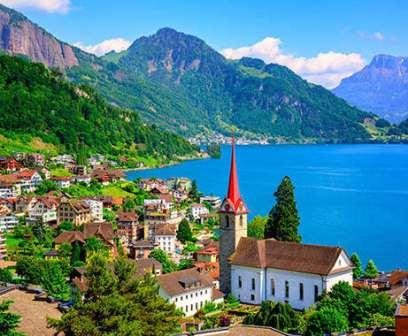 Switzerland, attracting millions of tourists for Alpine climate and landscapes, in particular for skiing and mountaineering, hopes to see more Azerbaijani tourists.

Federico Sommaruga, the head of emerging markets and special projects in the Swiss National Tourist Office announced about this during the presentation of tourism opportunities of Switzerland in Baku.

He said the delegation of 18 people representing the sectors of tourism, health and education in Switzerland, makes a visit to Baku, Almaty and Astana to promote the country's tourism opportunities.

“Tourism is one of the most profitable sectors of Swiss economy with an annual 28 billion Swiss francs turnover, making up four percent of the country's GDP. The sector employs 285,000 people, and ranked fourth on the export potential, giving way only to chemical industry, mechanical engineering and production of watches,” Sommaruga explained.

The Swiss expert believes that such presentations can contribute to the increase of tourist flow to the country, including from Azerbaijan.

“The number of Azerbaijani tourists decreased following the devaluation of the national currency in 2015. According to our data, in 2015, some 10,000 tourists from Azerbaijan visited Switzerland. We hope that this figure will rise in parallel to the rise of the Azerbaijani economy,” he said.

Talking about what Switzerland can offer for tourist, Sommaruga said that the land of four languages has beautiful scenery, architectural monuments and resorts: "We have prepared a special tour with the length of more than 1,000 km, which allows tourists to see all the beauty of the country."

Lack of a direct flight linking Azerbaijan and Switzerland creates certain difficulties, according to Sommaruga.
“Until last year, Azerbaijan Airlines carried out direct flights from Baku to Geneva, and the number of visitors was more. Undoubtedly, this is an important issue that we raised at the meeting with the Azerbaijan Tourism Ministry. Resolution of this issue does not depend on us but I hope that the flights will be resumed soon,” he said, adding that flights can be opened to Geneva or Zurich.

The direct flight from Baku to Geneva operated from July 2014 to March 2015. Low demand on the direction became the reason for closure of the flight.

A harmonious tableau of beautiful images, Switzerland is one of the favorite destinations for many Azerbaijanis. In 2013, 2,500 Azerbaijanis applied for Swiss visa and a year later the number of applications has doubled, reaching 5,000.

The main regions, attracting Azerbaijani tourists are Zurich, which is one of the prestigious centers of international business tourism, Geneva, St. Moritz and Zermatt, considering popular ski tourism centers in the world.

He said that the mountain resort of Bad Ragaz, known for its thermal springs is the most popular destination for Azerbaijanis. In early 2015, Azerbaijani tourists ranked second after Russians among the CIS nations coming to Bad Ragaz for medical trip.