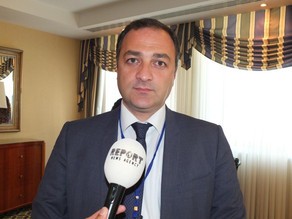 Georgia intends to sell them at affordable prices to Azerbaijan. Therefore a new package of proposals prepared, which will be presented to the Azerbaijani side in near future.

According to the information of Report, it was stated by Director of the Railway Carriage-Building Factory, Giorgi Areshidze.

He noted that the plant cooperate with JSC "Azerbaijan Railways" for a long-term: "We sell passenger and freight trains to Azerbaijan. The plant started production of new high-quality freight and passenger cars, electric trains. To do this, a necessary license obtained. High-speed trains produced in conjunction with China ply the route Tbilisi-Batumi."

According to him, the factory produced cars destined for the railways of post-Soviet European countries. We have the best prices. Therefore, we think that Azerbaijani Railways will be interested in our high-speed trains, especially freight cars after the project of the Baku-Tbilisi-Kars. Next month we will visit Baku with a new project and relevant documents."