Alstom to present its Citadis trams in Baku 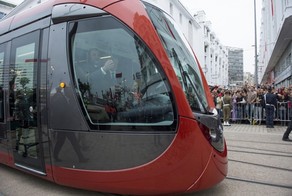 French "Alstom" company will be present at TransCaspian exhibition on 11-13 May 2016 in Baku, Azerbaijan.

During the exhibition, Alstom will present its Citadis tramway which offers new performance and comfort level, including spacious design with double doors, new ergonomic seat design options, real-time information on-board, direct & indirect lighting based on LED technology. It was informed by public relations manager of company Zaure Rahmetova Citadis is built on a platform of thoroughly proven standardised components, delivering record availability while facilitating maintenance operations (up to 11% cost reduction). Citadis is a low-floor tramway, i.e. easily accessible for all passengers and wheel chairs.A modern tramway adds a new dimension to the public transport of a city with regards to efficiency, capacity, speed and safety. The tramway produces less CO2 emissions than other transport systems.

Those metro trainsets werethe first ones with inter-car walkways which optimise passenger traffic flow and vertical handrails near the doors to enhance passenger safety when the train is in motion.

“Azerbaijan is developing its potential as an important link between the Caspian and Black Seas and between Russia and Iran. Alstom is ready to seize any opportunity to make Azerbaijanis’ travels smoother and safer.

Alstom has a successful experience in turnkey projects implementation worldwide and is eager to introduce its modern technologies to the local market”, says Elshan Zeynalov, Managing Director Alstom Azerbaijan.

In 2014, Alstom has been awarded a contract to supply 50 electric locomotives to Azerbaijan Railways (ADDY) which will be assembled in Alstom’s JV EKZ in Kazakhstan. The first electric locomotive is to be delivered in the beginning of 2017.