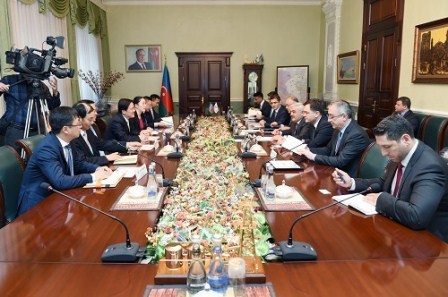 Rovnag Abdullayev, president of State Oil Company of Azerbaijan Republic (SOCAR) on May 31 met with the delegation of Chinese National Petroleum Corporation (CNPC) led by Wang Shihong, Board Member & Asst.President.

Emphasizing the successful development of Azerbaijani-Chinese bilateral relations and useful cooperation in many spheres, SOCAR President said that participation of Chinese companies in Azerbaijani economy, including energy sector contributed to the development of relations between the countries. Rovnag Abdullayev spoke about the long-term cooperation between SOCAR and CNPC, underlining the importance of joint projects and venture. The head of Chinese delegation thanked for the meeting and said they believed this visit would contribute to the development of bilateral relations.

He said they gave higher priority to cooperation with SOCAR and its energy projects. SOCAR president informed the guests about the regional and global projects implemented by SOCAR, including Oil and Gas Processing and Petrochemicals Complex project. The guest delivered the letter of CNPC president to Rovnag Abdullayev and invited him to visit China.