Winner of "EY Entrepreneur Of The Year™" award announced 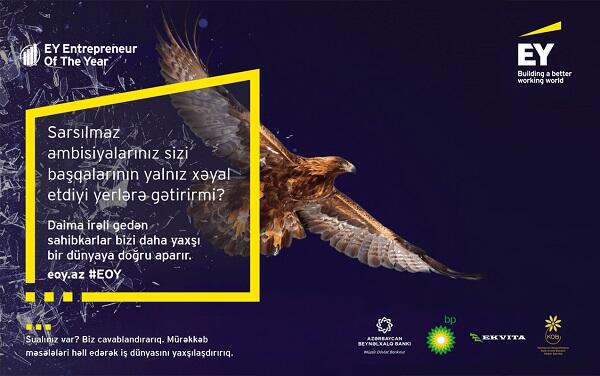 EY Azerbaijan is pleased to announce the winner of the ‘EY Entrepreneur Of The Year™’ Award. It is the second time this prestigious contest amongst entrepreneurs has been staged in Azerbaijan. The competition, which has been held in partnership with the Small and Medium Business Development Agency (SMBDA) of Azerbaijan, is sponsored by BP and IBAR. The contest is supported by Baku-based consultancy firm Ekvita.

Axar.az reports that the winner has been chosen by an independent judging panel made up of respected members of the business community, representatives of the international finance institutions and renowned senior executives. The judges had a group of 11 entrepreneurial leaders with an impressive track record to choose from.

In line with the principle of social distancing and existing restrictions on mass gatherings, EY and its partners unveiled the overall winner at a special award ceremony held on 8 April and attended only by a small group of people, with most participants and guests joining the event through video conferencing.

“There are many successful businessmen in our country, but to build something truly remarkable you should be able to overcome an array of challenges and carry on in the face of various adversities. I am sure our dedicated and resilient entrepreneurs will be able to bounce back from the crises caused by pandemic and continue to inspire and grow”, said Ilgar Veliyev, the managing partner at EY Azerbaijan. “EY is proud to honour the participants of the 2021 ‘EY Entrepreneur Of The Year’ competition who lead the small and medium business in this country and genuinely contributes to the nation’s development”.

From the onset of the competition, EY Azerbaijan teamed up with the Small and Medium Business Development Agency (SMBDA) of Azerbaijan. The agency’s head, Orkhan Mammadov said: “Support for small and medium-sized businesses is one of the key priorities when it comes to Azerbaijan’s economic development and we’ve managed to take some important steps towards these goals. Therefore, we’re extremely pleased that for two years running the ‘EY Entrepreneur Of The Year’ competition has focused on small and medium-sized businesses. We’re also pleased that entrepreneurs have responded proactively and shown interest in taking part in this contest. This suggests that more and more entrepreneurs will be willing to join the program in the future. I’d like to thank EY Azerbaijan and all the partners for supporting this contest and making it happen”.

Rasmina Gurbatova from Resm Jewelry has been announced as an overall winner of this year’s competition – she will represent Azerbaijan in the World Entrepreneur Of The Year competition where she’ll compete against the world’s most innovative and inspiring businessmen and businesswomen. After the announcement, Rasmina said: “I’m humbled, yet thrilled by the jury’s decision. Entrepreneurship is a great thing because it allows you the freedom to create. Just imagine, you can put to practice all the ideas that you’ve got at any time”.

The competition became possible thanks to the generous support of bp and The International Bank of Azerbaijan, IBAR.

Bakhtiyar Aslanbayli, bp’s Vice President Middle East and Caspian, Communications and Advocacy, said: “In our efforts to help develop the local supply chains and entrepreneurship, we are fully aligned with the aims of the “EY Entrepreneur Of The Year” competition since the contest clearly recognizes entrepreneurial achievements and growth efforts of local businesses. We would like to thank EY for this opportunity to support this prestigious competition and look forward to seeing Azerbaijan’s representative among the best entrepreneurs from around the world.”

“IBAR has been supporting ‘EY Entrepreneur Of The Year’ competition for two consecutive years. We deem it an important part of our mission to encourage entrepreneurship and support small and medium-sized businesses. Our bank has pledged to provide any possible support to the business community. As part of this mission, we’re always looking for innovative ways to assist entrepreneurs. Looking forward, we believe this competition will become one of the most effective and competitive platforms for entrepreneurs in Azerbaijan to demonstrate their talents and skills”, said Abbas Ibrahimov, Chairman of the Executive Board of International Bank of Azerbaijan.

About Entrepreneur Of The Year™

Entrepreneur Of The Year®, founded by EY in 1986, is the world's most prestigious business awards program for entrepreneurs. The program makes a difference through the way it encourages entrepreneurial activity among those with potential and recognizes the contribution of people who inspire others with their vision, leadership and achievement. As the first and only truly global awards program of its kind, Entrepreneur Of The Year celebrates those who are building and leading successful, growing and dynamic businesses, recognizing them through regional, national and global awards programs in more than 145 cities in more than 60 countries.