Correlations between Neanderthal DNA and depression 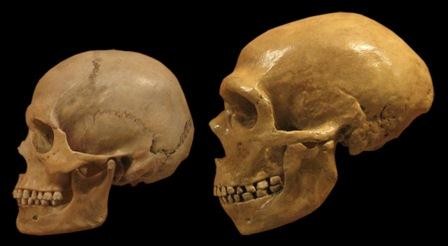 Around 60,000 years ago, modern humans left Africa to begin exploring other continents.

Along the way they met other early humans, such as Neanderthals, and the different species periodically bred together. Scientists have known this for a few years—there’s evidence in our DNA, of which 1.5 to 4 percent in modern Europeans and Asians is Neanderthal. But scientists never knew if those bits of genetic code had a lasting effect on our health.

After analyzing specific parts of DNA in 28,000 people, a team led by researchers at Vanderbilt University discovered correlations between Neanderthal DNA and 12 different health conditions, including depression and disorders of the skin and blood. The researchers have published their work in the journal “Science”.

The researchers identified 135,000 alleles, or variations in the genetic code, that some modern humans had inherited from Neanderthals. They then correlated the presence of those variations to more than 1,500 medical conditions listed in the patients’ electronic medical records.

Neanderthal DNA was correlated with a higher incidence of depression, addiction to tobacco, skin lesions caused by the sun, a slower metabolism, too much blood clotting, and a mutation connected to Parkinson’s disease.

In upcoming studies the researchers hope to continue to identify inherited genes that provide the underpinnings for contemporary diseases. If scientists can better understand the diseases themselves, they may also be able to develop more effective treatments.