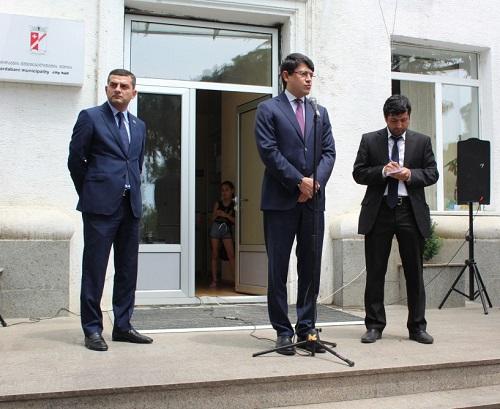 Fuad Muradov, chairman of the State Committee for Work with Diaspora, visited the Gardabani district in the frame of visit to Georgia where the Azerbaijanis live compactly.

Axar.az informs, the chairman of the committee introduced the ambulance car presented to the district administration by the Heydar Aliyev Foundation.

The chairman of the State Committee congratulated the public on Ramadan and National Salvation Day on behalf of the President of Azerbaijan.

It was noted that the car was provided with all the necessary technical equipment.

F.Muradov spoke about the Azerbaijani-Georgian relations and noted that the Azerbaijani state is interested in the development of these relations. He said that President Ilham Aliyev always paid attention and care to our compatriots living in this country. He also conveyed the greetings and best wishes of First Vice President Mrs. Mehriban Aliyeva.

The district administration, representatives of the Azerbaijani and Georgian communities thanked the Azerbaijani government and the Heydar Aliyev Foundation for the gift.

F.Muradov also met with local residents and was interested in their concerns.