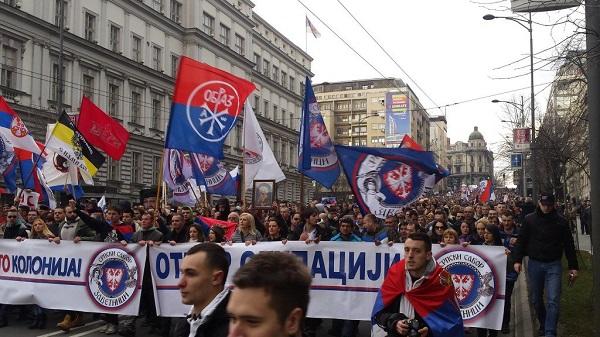 Many people have come out to protest in the central square of Kosovska Mitrovica in the north of unrecognized Kosovo.

According to the agency’s information, the rally started at noon, local time, mayor Goran Rakic addressed the protesters, calling on them to keep calm and stay patient. "I ask you to resist provocations prepared in the Western kitchens. As long as Serbs remain in Kosovo and Metohija, it will be both Serbian and ours," he said.

Rakic also said that three women were arrested on Tuesday in the Kosovo police operation. Their whereabouts are still unknown. The politician pointed out that a crisis office is constantly monitoring Pristina’s actions to react to the situation in Kosovska Mitrovica in a timely manner.

On Tuesday morning, the special forces of unrecognized Kosovo intruded into the northern municipalities of Kosovo and Metohija, the gunfire resulted in two Serbs receiving light injuries. Serbian President Aleksandar Vucic said that the Kosovar police special forces detained 23 people, including Russian national Mikhail Krasnoshchenkov, an employee of the United Nations Interim Administration Mission in Kosovo (UNMIK). The diplomat has been released and is currently hospitalized in a Kosovska Mitrovica hospital. On Wednesday, the Serbian Vecernje Novosti newspaper reported that more than 100 people suffered at the hands of Kosovo’s special police.