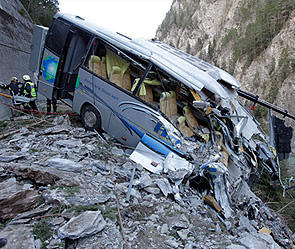 The number of people injured in a crash involving a passenger bus and a truck the Stavropol Region has reached 19 people; 15 of them were hospitalized, Stavropol Region Governor Vladimir Vladimirov reported on Friday.

Axar.az reports citing TASS that it was earlier reported five people were killed and 18 were injured, 14 of whom were hospitalized.

"Nineteen people applied to the hospital for treatment. Fifteen of them were hospitalized, including five people in grave condition," Vladimirov wrote on Instagram.

According to the regional government, there were two people in the truck and 26 people in the bus when the collision occurred at about 02:30 Moscow time in the Apanasenkovsky district, Stavropol Region. The bus overturned in the crash. A prosecutor check was ordered, and a dash camera record in the bus was confiscated.