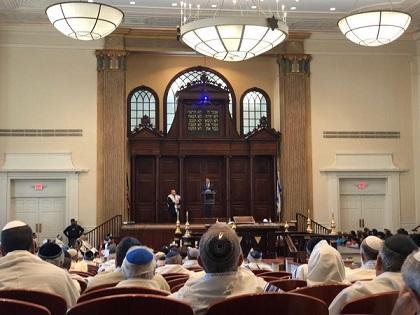 The Los Angeles-based Nessah Synagogue, which is the largest synagogue of Persian Jews in the U.S., hosted a talk dedicated to Azerbaijan’s model of multiculturalism and interfaith tolerance on August 17, 2019. At the invitation of the Synagogue, Azerbaijan’s Consul General in Los Angeles Nasimi Aghayev addressed over 800 members of the congregation.

Axar.az reports that opening the event, the Synagogue’s Chief Rabbi David Shofet expressed his appreciation for the opportunity to get to know Azerbaijan, a majority-Muslim country, where Muslims, Jews, Christians and representatives of other faiths have been living together in peace, dignity and mutual respect for centuries. Praising Azerbaijan’s positive relations with its Jewish community and Israel, Rabbi Shofet expressed his hope that many more nations would follow Azerbaijan’s example.

In his remarks, Consul General Nasimi Aghayev informed the audience about Azerbaijan’s geographic location, history of independence, its steady modernization and remarkable transformation from a poor and war-torn country in the early 1990s into a regional economic powerhouse and an island of stability and prosperity in the entire region today.

Highlighting Azerbaijan’s long-standing traditions of interfaith acceptance and positive multiculturalism, Aghayev said: “The principle of interfaith tolerance and harmony has always been an important part of Azerbaijani culture. But as an independent nation, Azerbaijan has elevated this principle making it a strong Government policy under the leadership of President Ilham Aliyev. This policy and the environment of religious tolerance and inclusion enables all Muslims, Jews, Christians, Baha’is, and others to have the full freedom of religion, practice their faith freely and live in harmony with representatives of other religions.” Speaking of the wider implications of this model of multiculturalism for the world, the Consul General noted: “In light of the dangers we face today, we must push the world to embrace the concept of multi-faith and multicultural harmony, and with Azerbaijan’s example we are showing that this harmony is possible.”

Furthermore, Consul General Aghayev spoke about Azerbaijan’s 2,000-year-old Jewish community as well as the successful cooperation and partnership between Azerbaijan and Israel in various fields ranging from energy to defense to tourism. He stated that reciprocal high-level visits between the two countries have further strengthened these relations.

The presentation was received with much interest from the audience.

It is noteworthy that Los Angeles is home to the largest Persian Jewish community outside of Iran and Israel. Around 60,000 Persian Jews live in Los Angeles.