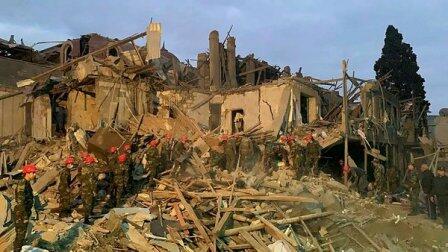 The armed forces of the occupying Republic of Armenia deliberately violated the norms and principles of international law, the Geneva Conventions of 1949 and their Additional Protocols, as well as the requirements of the humanitarian ceasefire declared on October 10, 2020 at 12:00. continues to shell settlements with heavy artillery.

Axar.az informs that, the Prosecutor General's Office told that 5 people were killed as a result of rocket fire by enemy forces on 11.10.2020 at around 02:00 in a multi-apartment residential building in the central part of Ganja, the second largest city of the Republic of Azerbaijan. killed, 28 people were injured and numerous civilian infrastructure facilities were severely damaged.

As a result of an Armenian missile attack, 9 people, including 4 women were killed, 34, including 16 women and 6 children, were injured and more than 100 civil infrastructure facilities were significantly damaged according to the Press Service of the Prosecutor General's Office of the Republic of Azerbaijan.

As reported, on October 11, 2020, at around 2 AM midnight, the rockets, shelled by the Armenian troops on Ganja, the second largest city of Azerbaijan that is fully outside of the battlefield, in rude violation of humanitarian ceasefire, ruined an apartment building fully, and the residents remained under rubble.

The relevant forces of the Ministry of Emergency Situations involved in the scene, rescued 17 injured people and removed 9 corpses from under the ruins.

The search and rescue operations have been completed, taking into account that no one was left under the rubble according to the relevant agencies.

Note that the Ministry of Emergency Situations operates in an enhanced mode at the moment. Please, immediately call the “112” hotline of the Ministry in case of any emergency.​