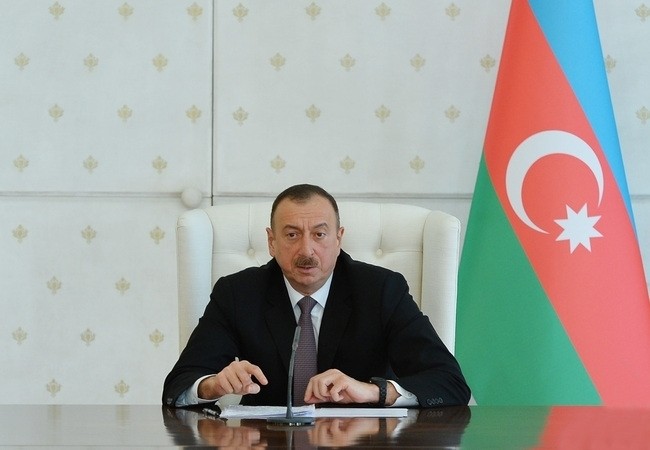 The president made the remarks addressing a meeting of the Cabinet of Ministers dedicated to results of socio-economic development in nine months of 2016 and objectives for the future.


“I would like to emphasize two of these organizations,” said the president. “One of them is the Organization of Islamic Cooperation which at this year’s summit established a contact group on the Armenia-Azerbaijan Nagorno-Karabakh conflict. This group has already started working.”


“In addition, the recent summit of the Non-Aligned Movement, the organization that follows the UN in number of member states, adopted a decision on the resolution of the Nagorno-Karabakh conflict within the sovereignty and territorial integrity of Azerbaijan,” said Ilham Aliyev, calling this great diplomatic and political success of the country.


The head of state noted that such positive trends can also observe within other organizations.


“For example, the European Parliament, which in its recent statement has demonstrated a fair position on the Nagorno-Karabakh conflict,” he added.

“The Azerbaijani public knows very well that within a year Azerbaijan severed all ties with the European Parliament and left the Euronest. They also know all the reasons,” said the president. “I want to point out that it was not our fault. We faced injustice. They insulted us and used the expression unacceptable for diplomacy. We also had our say. The Azerbaijani parliament also made a very reasonable, well-founded statement in response to the European Parliament.”

Azerbaijan has frozen all its ties with the European Parliament for one year, he noted.

“I’ve stated that time that it is good to have relations, but the lack of these relations wouldn’t affect us,” said Ilham Aliyev. “What was the result? They themselves arrived in Azerbaijan to restore the relations. They saw that insult, pressure are not producing results.”

“We also made proposals. They welcomed these proposals, and a joint statement was made. In the joint statement, the European Parliament expressed regret over its anti-Azerbaijani actions,” added the president.