US military delegation pays a visit to Azerbaijan 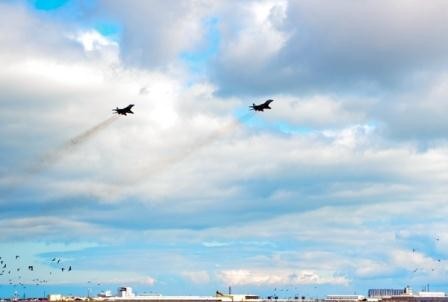 During the meetings held by the US delegation in Azerbaijan, the sides discussed the enhancement of Azerbaijan-US military relations, further strengthening of the cooperation in the regional security, the prospects of coordination of joint actions with the US and NATO structures and other issues, the press service of Azerbaijani Defense Ministry told on Friday.

The US delegation, accompanied by Azerbaijani Deputy Minister of Defense, Air Force Commander, Lieutenant General Ramiz Tahirov, visited the air base. They were presented a detailed briefing about the base’s history, specifications, objectives and tasks. After reviewing the staff and the specifics of combat duty, the command post, military air assets, the guests asked about the social conditions of the personnel.

The delegation met with flight and technical staff and expressed content with the conditions created for combat at the airbase after watching test flights performed by MIG-29 warplanes.

The same day the visitors visit the Main Clinic Hospital of the Armed Forces, meeting with the hospital’s leadership and medical staff. The US delegation was informed about the hospital’s history and activities.

The guests were acquainted with the up-to-date equipment and apparatus in chambers and operation blocs.

In accordance with the cultural program, the US delegation then visited the Museum of Azerbaijan Military History.