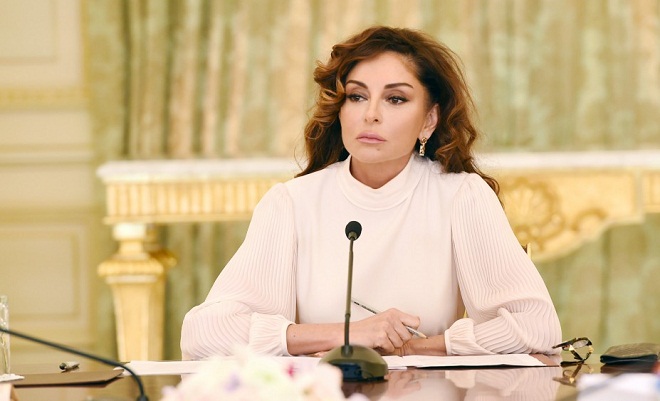 I vice - president of Azerbaijan Republic Mehriban Aliyeva has chaired a meeting on 9th March.

Axar.az reports that meeting was dedicated to immigrants which are living in dormitories in Baku and Sumgayit.

***
First Vice-President of the Republic of Azerbaijan Mehriban Aliyeva has chaired a meeting on the resettlement of refugee and IDP families who are temporarily settled in dormitories in Baku and Sumgayit.

Axar.az reports that, addressing the meeting, Mrs. Aliyeva said the meeting is devoted to the solution of the problems of Azerbaijanis who were forced to leave their native lands.

According to the first vice-president, the issue of refugees and IDPs has been a priority for the state for more than 20 years.

She noted that the necessary actions are being taken within the State Programme on the improvement of the social conditions of refugees and IDPs to solve their social, educational, employment, living and medical problems.

The first vice-president mentioned that about 100 modern residential complexes have been created throughout the country for IDPs, 250,000 IDPs have been provided with apartments, 150 schools, 60 medical facilities and kindergartens have been constructed in the new settlements, and hundreds of thousands of refugees and IDPs have been employed over the past 13 years.

Mehriban Aliyeva said that many IDP families nevertheless live in the buildings that are in disrepair, stressing the need to take additional measures to accelerate the efforts to improve their living conditions.

The first vice-president noted the importance of granting new apartments to refugees and IDPs settled in Baku and Sumgayit cities, allocation of extra funds and areas for the construction of new buildings in this regard.

A brief presentation about the activities carried out to resolve the problems of refugees and IDPs was made at the meeting. The presentation highlighted that the Armenia-Azerbaijan Nagorno-Karabakh conflict caused more than $800 billion to Azerbaijan’s economy. Thanks to the policy pursued by Heydar Aliyev, the truth about the conflict was delivered to the international community. Azerbaijani President Ilham Aliyev, who is taking consistent and purposeful measures to strengthen the social protection of IDPs and improve their living conditions, signed 55 decrees and orders in 2003-2017. From 2001 to 2016, ninety-five settlements, 151 schools, 58 cultural centers, 59 medical centers and other infrastructure facilities were built. The poverty rate among IDPs declined from 75 percent to 12 percent.

Summing up the meeting, Mrs. Aliyeva underlined the importance of making joint efforts to resolve this issue as soon as possible.

Mehriban Aliyeva called on the Ministry of Finance and the Baku City Executive Authority to create a joint working group to resolve this issue as soon as possible.

“Today, our main goal is to provide 4,000 IDP families with new apartments in Baku and Sumgayit. Families living in the most difficult conditions should be moved to new buildings in the near future,” said the first vice-president, ordering to ensure coordination among relevant state bodies.

Mehriban Aliyeva expressed her confidence that the Armenia-Azerbaijan Nagorno-Karabakh conflict will be resolved fairly, the country’s territorial integrity will be restored, all refugees and IDPs will return to their homes.