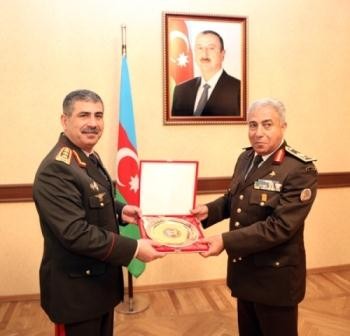 
Minister Hasanov thoroughly informed the Egyptian delegation about the military and political situation in the region and the Armenian-Azerbaijani conflict, the Azerbaijani Defense Ministry informed about it.


Speaking about the military cooperation between Azerbaijan and Egypt, Hasanov praised the development of bilateral relations in different areas.

The Egyptian border guard commander, in his turn, said his country is interested in further developing relations with Azerbaijan, noting vast opportunities in this respect.

The sides stressed the importance of expanding military and military-technical cooperation between Azerbaijan and Egypt and conducting exchange of experience in counterterrorism and the sphere of combat readiness.


Moreover, the sides exchanged views on a number of issues of mutual interest.