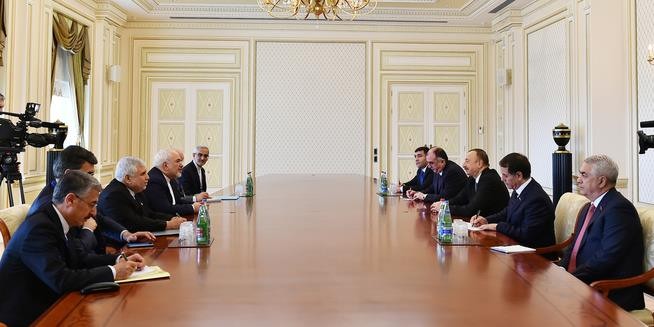 The head of state stressing importance of the first meeting of Iranian, Russian and Azerbaijani foreign ministers in Baku said that the trilateral meeting will open a new page in the history of regional cooperation and contribute to the strengthening of peace and stability in the region. Ilham Aliyev recalling his last visit to Iran expressed his gratitude for the hospitality shown during a trip.

President Aliyev added that the agreements on various areas, signing of several documents between the sides in framework of his visit to Iran created new opportunities for cooperation between countries and he described it as historic visit. Expressing satisfaction within the high level of cooperation between Azerbaijan and Iran, the head of our state said Azerbaijan is interested in further development of existing relations, and expressed confidence that its goals will be achieved. Ilham Aliyev noted that the two countries support each other within International organizations.

Foreign Minister of Iran conveyed the greetings of President Hasan Rouhani. Mohammad Javad Zarif recalling President Ilham Aliyev’s an official visit to Iran stressed that this visit historically contributed to further development of existing relations between the two countries. Iran's foreign minister stressed the importance of trilateral cooperation format that initiated by Azerbaijan, and on the basis of the consent of the presidents of Azerbaijan, Iran and Russia.

Noting on the discussions with his counterparts from Azerbaijan and Russia on various areas of cooperation Mohammad Javad Zarif stressed existence of good opportunities between countries in transit, custom issues, fight against extremism, as well as tourism, culture and other fields.

Mohammad Javad Zarif said that this trilateral format help to Iran in improvement of relations with Azerbaijan and Russia.

President Ilham Aliyev expressed his gratitude for the greetings of Islamic Republic of Iran Hasan Rouhani and asked for his greetings to convey to the head of Iran.