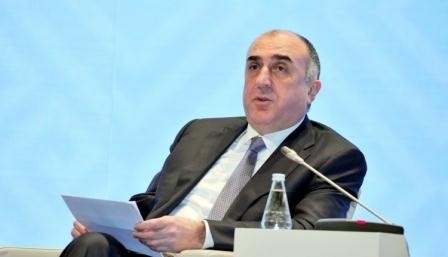 "Prolonged and unresolved conflicts tend to provide fertile ground for violent extremism. We should try to solve the conflict. It is not too late, we can achieve our goals."

Local media reports that, Azerbaijani Minister of Foreign Affairs Elmar Mammadyarov said at the plenary session on the theme "Partnership and Platform against violent extremism" organized in the framework of the VII Global Forum of UN Alliance of Civilizations in Baku.

“We have probably lacked a deeper look into the roots of the violent extremism, which is spreading beyond imagination today,” the FM said, noting that some international actors definitely had noble goals but wrong strategies, while others surely had right strategies for bad causes.

Mammadyarov added that prolonged and unresolved conflicts tend to provide fertile ground for violent extremism, not only because of the suffering and lack of governance resulting from the conflict itself but also because such conflicts allow violent extremist groups to exploit deep-rooted grievances in order to garner support and seize territory and resources and control populations.

“Had the international community been listening to us then, sticking to universal norms and principles, and taking bold steps to stop violent extremism and all of its manifestations and consequences, we could have been in a much better place today to stumble a domino effect and tackle this phenomenon. Still, it is never too late and I have some ideas to share for our common strategy,” he said.