"We decently responded to the enemy" 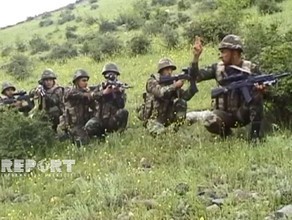 "We will liberate our lands from Armenian occupation immediately after 'Fight!' command".

"We decently responded to the enemy. Armenian soldiers left their positions, abandoned weapons and fled away".

M.Baghirov, who has destroyed a large number of Armenian equipment and manpower during the events occurred on the frontline in early April, stressed that in addition to preventing Armenian provocation, Azerbaijani army has liberated strategic positions and heights, which had been under occupation: 'Armenians saw power of Azerbaijani army. We fought forward, strengthened at significant heights and positions. We are waiting for the command of the Supreme Commander-in-Chief, we will liberate our lands from Armenian occupation immediately after 'Fight' command'.