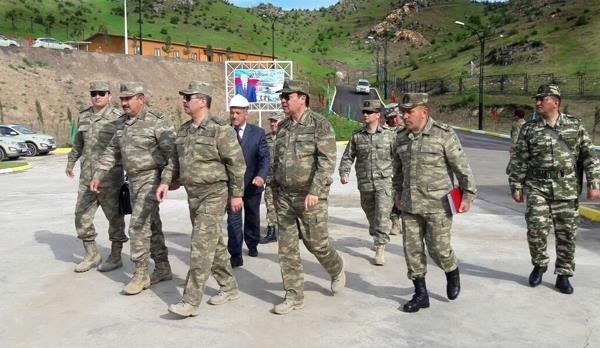 According to the instructions of Azerbaijani President, Supreme Commander-in-Chief of the Azerbaijani Armed Forces, Ilham Aliyev, a new military unit for the camp units on the front line, with modern equipment was built and put into operation.

Participating in the opening ceremony of a new military unit, leadership and command staff of the leadership of the ministry have familiarized with the unit's military staff, dining room, boiler room-laundry-bath complex, checkpoint, hostel, including administrative, service, ideological rooms, rest rooms and arsenal, storehouses of food and possessions.

A permanent automatic generator was established in the territory of the military unit, water, gas, electricity and other communication lines were provided.

In accordance with the instruction of the Supreme Commander-in-Chief, Defense Minister, Colonel-General Zakir Hasanov met with residents in nearby villages to the military unit and the employed civilian staff, reviewed the conditions.

Then Defense Minister told the personnel on the work done in connection with the strengthening of military and moral-psychological readiness, improvement of social and living conditions of servicemen, strengthening the material-technical base.

Defense Minister gave corresponding instructions in connection with the construction of new military units on the frontline in the frontal zone.