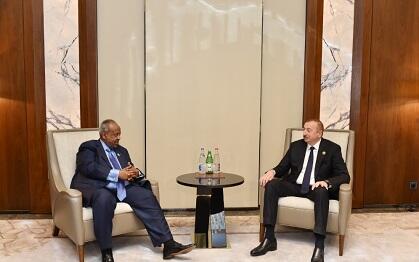 The Djiboutian president thanked President Ilham Aliyev for the excellent organization of the 18th Summit of the Non-Aligned Movement and hospitality.

President Ismail Omar Guelleh said that Azerbaijan was subjected to aggression by the neighboring country, adding that Azerbaijan`s just demand for the settlement of the conflict was legitimate. The president recalled that the National Assembly of Djibouti adopted a resolution recognizing the Khojaly genocide.

President Ilham Aliyev stressed the importance of cooperation and mutual support between the two countries within international organizations. The Azerbaijani president pointed out that the events committed in Khojaly were recognized as a genocide by more than 10 countries. The head of state underlined that the resolution on the Khojaly genocide adopted by the National Assembly of Djibouti was highly appreciated.

The sides also exchanged views on the development of economic and trade relations between the two countries.