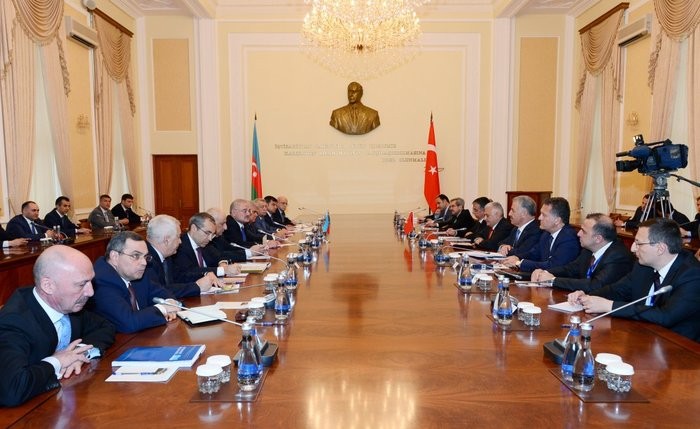 Prime Minister of Azerbaijan Artur Rasizade has today met Turkish Premier Binali Yildirim, who is on an official visit in Azerbaijan.

Artur Rasizade congratulated Binali Yildirim on his election as the Chair to the ruling Justice and Development Party and his appointment as Prime Minister, and wished him success in state activities.

The Azerbaijani Premier said Binali Yildirim’s visit to Azerbaijan would certainly contribute to the further strengthening of cooperation between the two countries.

Artur Rasizade hailed the Azerbaijani-Turkish relations, noting there was huge potential for expanding these ties according to requirements of the present time and highlighted the importance of huge projects to be implemented jointly by the two countries.

Artur Rasizade also noted there was no basis for the so-called “Armenian genocide” resolution adopted by the German Bundestag.

The Premier condemned the German Parliament as the Bundestag ignored the Armenian aggression against Azerbaijan, the bloody ethnic cleansing committed by Armenia against over 1 million Azerbaijanis in Armenia’s territory ousting them from their historical lands, the Khojaly genocide, as well as UN Security Council’s four resolutions demanding unconditional and immediate withdrawal of the Armenian armed forces from the occupied Azerbaijani territories, and instead, adopted a resolution on a distorted historical incidence as the so-called “Armenian genocide” happened a hundred years ago.

Binali Yildirim thanked for hospitality and highlighted the significant role of the high level reciprocal visits in development of the brotherly relations.

The Turkish PM said his visit to Baku would contribute to expansion of the bilateral ties, noting the two countries carried out international projects like the Baku-Tbilisi-Ceyhan, Baku-Tbilisi-Erzurum, Baku-Tbilisi-Kars, TANAP, and would continue the cooperation even further.

Binali Yildirim expressed confidence that the bilateral ties between the two countries based on friendship and brotherhood would continue to expand in the years to come.

The Turkish Premier said the resolution adopted by the German Parliament meant nothing for Turkey.

The two Premiers had comprehensive exchange of views on a number of other issues of mutual interest.