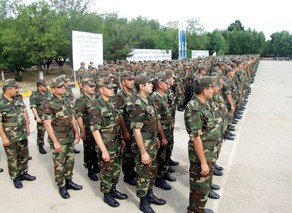 In accordance with the instruction of Defense Minister, Colonel General Zakir Hasanov, military units and formations have launched special regime due to hot weather conditions in order to prevent heat and sun stroke among the Armed Forces personnel.

The ministry said that according to the amended disciplinary rules, martial arts trainings are held till 11:00 and after 17:00 to prevent heat and sun stroke among the personnel in hot weather conditions. Also, servicemen take a rest in the afternoon. While planning combat training and daily activities, servicemen train mostly in shady places, in barracks, not under direct rays of the sun as well as aren't involved in the works under open sky.