Armenian author: "I stepped over the corpses" 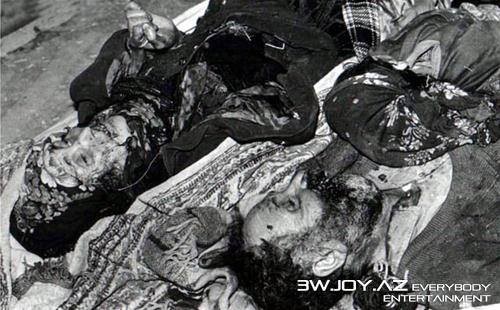 In his book “For the sake of cross” Armenian writer and journalist David Kherdiyan who currently lives in Libya proudly recalls crimes committed against Azerbaijani Turks in Khojaly. In the 19th and 76th chapters he says;

“Sometimes we were obliged to walk on the dead bodies of Azerbaijanis. I remember well, we made a bridge from the dead bodies in order to cross the bog near the place called the Dashbulaq. When I refused to walk on these lifeless men bodies, the major named Seyran Ohanyan ordered me not to be afraid. I obeyed him because caring out the order of the Commander of the higher military rank is one of the military rules. I was compelled to step on the 9-10 aged wounded girl’s chest and crossed the bog. My shoes and trousers were in the blood completely. And totally I stepped on 1200 corpses.” On 2nd March the Armenian group naming “Gaphlan” (their work was to burn the dead bodies) about 2000 contemptible Mongolians’ (Turkish) corpses were collected and then buried in various parts of Khojaly town.

I saw a girl about 10 years old in last truck who was injured in her head and arms. When I looked attentively, I saw that she was breathing slowly. She was still alive however cold, hunger and severe injury. I will never forget this child’s eyes fighting against the death. Then a soldier whose surname was Tigranyan threw the girl into the fuel oil spilled over the bodies holding her ears. They burned the bodies. Afterwards cry and sounds of distress were heard from the bonfire.