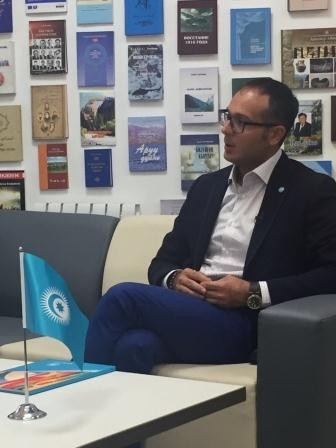 Secretary General of the Turkic Council Ambassador Ramil Hasanov, who is in the Kyrgyz Republic to attend opening ceremony of the 2nd World Nomad Games, gave an interview to Kyrgyz State Television and Radio Corporation on 1 September 2016.

In the beginning of the interview Secretary General Hasanov congratulated the Turkic States on the 25th Anniversary of their Independence as well as the Kyrgyz Republic and the people of Kyrgyzstan on the occasion of 31 August Independence Day.

In addition to this, Secretary General Hasanov provided information about the upcoming Sixth Summit of the Heads of States of the Turkic Council to be hosted by the Kyrgyz Republic in November 2016, its agenda items and the projects planned to be implemented in the coming period.

At the end of the interview Secretary General Hasanov wished peace, prosperity and happiness to the Kyrgyz Republic and brotherly people of Kyrgyzstan.

Secretary General Hasanov congratulated Director General Isakov for the intensive and dedicated work carried out ahead of the 2nd World Nomad Games which will begin on 3 September 2016. Secretary General Hasanov also exchanged information with Director General Isakov regarding the preparations of the Sixth Summit of the Heads of States of the Turkic Council to be hosted by the Kyrgyz Republic in November 2016 and certain agenda items of common interests to the member states to be discussed during the Summit.

Furthermore Secretary General Hasanov congratulated and conveyed his best wishes to Director General Isakov and all Kyrgyz people on the occasion of 31 August Independence Day of the Kyrgyz Republic.