Two oil tankers attacked in the Gulf of Oman - Updated/Photo 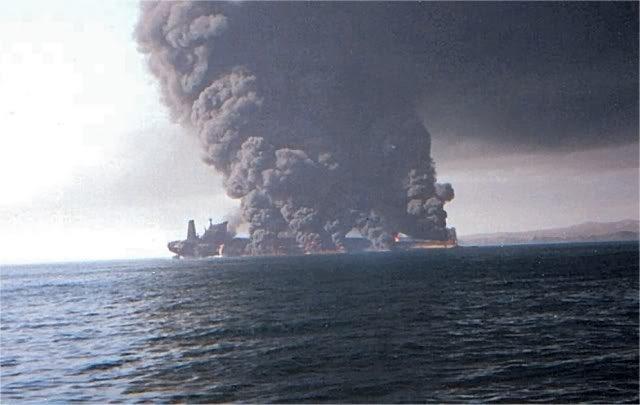 The incident emerged in Middle Eastern media a month after an attack on four vessels off the Emirati coast, which UAE investigators blamed on an unspecified "state actor".

The blasts are thought to have been caused by “attacks” on the tankers; it was not immediately clear from the report under which country or countries they were registered.

Pakistani sources were also quoted as saying that the tankers had sent distress calls.

Meanwhile, the UK Maritime Trade Operations, a maritime safety group run by the Royal Navy, has warned about an unspecified incident in the Gulf of Oman between the Emirate of Fujairah and Iran's coast. The group urged "extreme caution" given the ongoing tensions in the region between the United States and Iran, and said that an investigation is underway.

It comes a month after another apparent attack on vessels in the Gulf. On 12 May, four oil tankers — two Saudi, one Emirati and one Norwegian — were targeted off the coast of Fujairah in what the UAE Foreign Ministry described as acts of sabotage.

The three countries whose ships were damaged said in a joint statement that limped mines were placed in a “sophisticated and coordinated operation” by divers. The UAE suggested that it was likely the work of a “state actor” but stop short of identifying the culprit.

US officials, however, were quick to point the finger at Iran. "It's clear that Iran is behind the Fujairah attack. Who else would you think would be doing it? Someone from Nepal?" said US National Security Adviser John Bolton.

In turn, State Secretary Pompeo claimed that Iran had attacked the tankers to raise the global price of oil.

Tehran has denied any involvement and called for an investigation.

Iranian saved 44 sailors from tankers after a reported attack and took them to the Iranian port of Jask, the state-run IRNA news agency reported on Thursday.

The US Navy's 5th Fleet also said that it was assisting two oil tankers targeted in a "reported attack" near the Strait of Hormuz, after the vessels sent disstress calls.

It was not immediately clear who attacked the vessels, one of which has been identified as Front Altair, a crude oil tanker owned by Norway’s Frontline and carrying the flag of the Marshall Islands.

According to shipping newspaper Tradewinds, Frontline's oil tanker had been "torpedoed" off the coast of the Emirate of Fujairah.

Taiwan'S energy firm CPC said it had suspicions that Front Altair, which was carrying 75,000 tonnes of naphtha, was hit by an unknown object.

Meanwhile, shipping company Bernhard Schulte said that its oil tanker Kokuka Courageous was also damaged in the incident. Kokuka was sailing from Saudi Arabia to Singapore with a cargo of methanol.

“The hull has been breached above the water line on the starboard side,” the company said in a statement. “All crew is reported safe and only one minor injury reported.”

Earlier in the day, Iran's Press TV said that two successive blasts affected two oil tankers on Thursday morning in what it described as "attacks".

Norwegian newspaper Dagbladet quoted Oman authorities as saying that at least one tanker had been attacked in Iran's territorial waters in the Gulf of Oman.

Brent crude climbed 4.5 percent in the wake of the reports.