The Generals together: The Minister committed - Photo 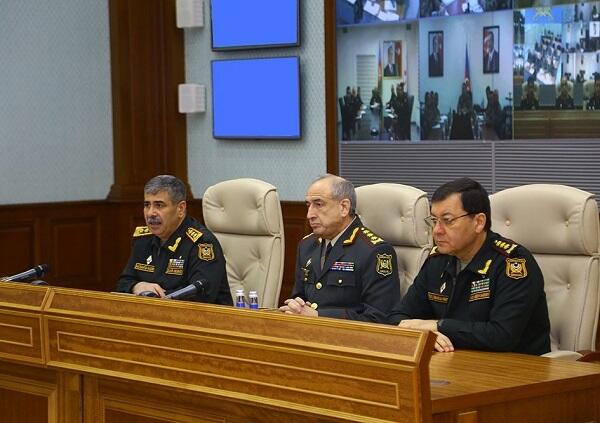 On February 15, the Minister of Defense Colonel General Zakir Hasanov held an official meeting with the Deputies of Minister of Defense, Commanders of types of troops, Chiefs of Main Departments, Departments and Services of the Ministry, and the Army Corps Commanders at the Central Command Post. Commanders and other officers of formations stationed in the frontline zone were also involved in the meeting via video communication.

Colonel-General M. Aliyev, speaking about the positive impact of the dynamic socio-economic development of our country on army construction emphasized the successful accomplishment of the important tasks assigned by the Supreme Commander-in-Chief to the Armed Forces, the growth of the country's defense power and international authority of Azerbaijan Army as a result of ongoing large-scale military reforms, the improvement of the social conditions of servicemen and their families, and noted that work in this area will continue at the state level also in the current year.

The Minister of Defense conveyed to the command staff the respective tasks assigned by the President of the Republic of Azerbaijan, the Supreme Commander-in-Chief of the Armed Forces, Mr. Ilham Aliyev to the Azerbaijan Army, and gave the relevant instructions to fulfill the tasks facing the army in this year.

Colonel-General Z. Hasanov, analyzing the operational situation on the front line, instructed to constantly monitor the enemy’s actions using visual and special technical equipment on the forward defense line, immediately suppress enemy’s possible provocations, increase the vigilance of the military personnel of the units and ensure their safety, and also uninterruptedly provide units being on a combat duty in difficult terrain, in particular in high mountain regions with material and technical resources.

The Minister of Defense gave recommendations for conducting various exercises and practical training aimed at increasing the combat readiness of troops and the level of combat readiness of military personnel in the daytime and at night, in conditions close to real combat, in an intense electronic warfare environment.

Touching upon issues of combat training and military education, the Minister of Defense emphasized the importance of applying best practices and innovations in the system of military education and training of professional military personnel, appointing experienced servicemen to the positions that determine combat support, as well as raising the level of combat and mobilization readiness.

The Minister of Defense Highly assessing the moral-psychological state of the military personnel of the Azerbaijan Army, emphasized the need to consolidate ideological work, to strengthen law and order and also military discipline, including social protection of servicemen and their families, as well as to expand interaction with relevant state bodies.

At the end of the meeting, the Minister of Defense gave the command staff a number of assignments in regard to official and combat activities.