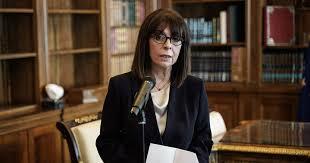 It is reported that the President arrived in the Turkish city of Aydin on Donkey Island. Sakellaropoulou will stay here for 4 hours and visit the national prison and school on the island.

Note that the map compiled by Britain in 1943 and the United States in 1951 shows Donkey Island as Turkish territory. The island has been controlled by Greece for 16 years. There are military bases here and hundreds of Greek soldiers are active.