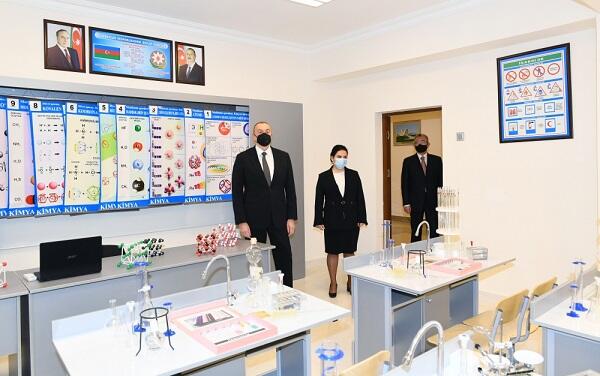 Today, President Ilham Aliyev has inspected the conditions created at the reconstructed secondary schools No. 90 in the capital's Sabunchu district and No. 97 in the Surakhani district.

Axar.az informs President Ilham Aliyev first got acquainted with the conditions created at school No. 90 in the Ramana settlement of Sabunchu district.

It should be noted that the two buildings of the school, built-in 1939 and 2002, were demolished and replaced by a new building for 960 students. The school has classrooms equipped with modern teaching equipment, computer science, military, music classrooms, chemistry, physics, biology laboratories, library, sports and assembly halls. The 288-seat building and gymnasium, built-in 2006, have also been overhauled.

President Ilham Aliyev also got acquainted with the conditions created at secondary school No. 97 in the Amirjan settlement of the Surakhani region.

Two buildings of the school, built in 1937 and 1970, were demolished. A new modern building for 264 students, a dining room, sports and assembly halls have been built in their place. At the same time, the 264-seat building for primary school, built in 2007, was overhauled. Classrooms, classrooms, laboratories in the new building are provided with the necessary teaching equipment and resources.