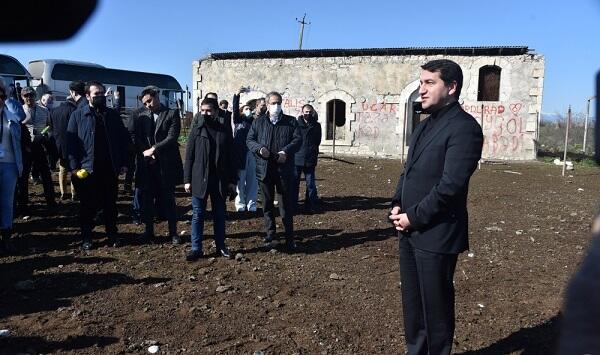 On the instructions of President of Azerbaijan Ilham Aliyev, a visit of representatives of the diplomatic corps to the liberated territories was organized on March 6. The purpose of the visit is to get acquainted with the atrocities and crimes committed by the Armenian armed forces in our ancient lands.

The heads of the diplomatic corps in Azerbaijan, military attaches and journalists arrived in the village of Merdinli in the Fuzuli region, which was liberated from Armenian occupation, to get acquainted with the current state of the mosque.

An aide to President Hikmet Hajiyev, who spoke about the Armenian atrocities, said that one of the most obvious examples of atrocities committed by our notorious neighbors is the Merdinli Mosque. Thus, the Armenians used this mosque as a stable, insulting the religious feelings of not only the Azerbaijani people but also all Muslims.