Geneva talks on the Cyprus problem kick off 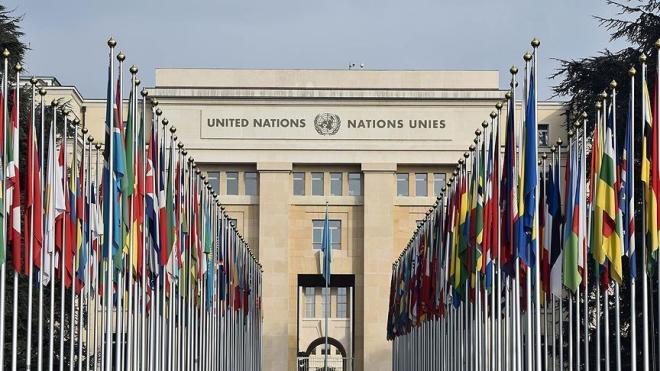 UN-led Geneva talks on the Cyprus problem got underway on Monday morning with the property issue being discussed during the first meeting between President Nicos Anastasiades and Turkish Cypriot leader Mustafa Akinci.

Talks are being held under the auspices of the UN Secretary General`s Special Adviser on Cyprus Espen Barth Eide.

Anastasiades and his aides arrived first at the Palais des Nations where he was welcomed by Michael Møller, Director General of the United Nations Office at Geneva, Eide and the UNSG`s Special Representative in Cyprus Elizabeth Spehar.

Asked by reporters, “are you ready?” he replied: “We’re ready”

Akinci arrived a few minutes later accompanied by his aides and was welcomed by the same UN officials. He said, kalimera, gunaydin, good morning.

On the part of the Greek Cypriot side, negotiator Andreas Mavroyiannis, Government Spokesman and Director of the President`s Diplomatic Office NiCos Christodoulides as well as the head of the Working Committee on the property issue Erato Kozakou Marcoulli also attends the meeting.

The two leaders agreed during a preparatory meeting they had in Geneva on Sunday that their meetings on January 9-11 will take place from 0900-1300 local time and from 1800-2030. On Monday their afternoon meeting is scheduled to take place from 1730 until 2000.

A multilateral conference on Cyprus is scheduled to begin on January 12 with the participation of the guarantor powers: UK, Greece and Turkey.

The two leaders had a preparatory meeting on Sunday in Geneva during which they decided that they will hold six meetings here between January 9-11 and that they will discuss the chapters of their negotiations in the following order: 1. Property 2 Governance and security/guarantees 3. Economy/EU 4. Financing/Implementation 5. Territory 6. Property/pending issues.