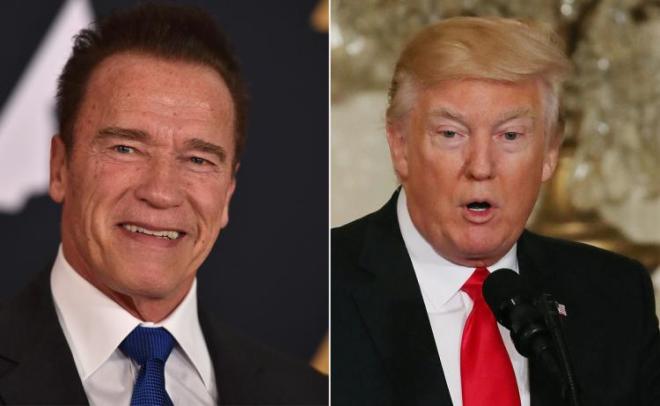 “I think that the real problem is that it was vetted badly,” Schwarzenegger, a Republican and immigrant from Austria, told Extra. “I know what he’s trying to accomplish, and his fear about having people come in from other places and cause harm to the country and all of that stuff. But there is another way of going about it to do it the right way and to accomplish still all the same goals. And so I think that they were hasty with it.”

While the Trump administration moved Sunday to clarify that green card holders are exempt from the order, the measure was initially said to apply them as well.

“I was in that position,” Schwarzenegger told Extra, expressing frustration with reports of college students being blocked from returning to the United States. “It's crazy. It's crazy and it makes us look stupid when the White House is ill-prepared to put this kind of executive order out there.”

Schwarzenegger, who replaced Trump on NBC’s “Apprentice,” supported Ohio Gov. John Kasich in the Republican presidential primary and refused to vote for Trump in the general election. Trump took aim at Schwarzenegger after the new show debuted in early January, tweeting that it “got swamped” in the ratings.

In a retort on Twitter, Schwarzenegger said he hoped Trump would “work for ALL of the American people as aggressively as you worked for your ratings.”

In the weeks since, Schwarzenegger criticized Trump for bypassing former California Lt. Gov. Abel Maldonado for agriculture secretary, before taking to Twitter last week to criticize Scott Pruitt, Trump’s nominee to head the Environmental Protection Agency, for leaving open the possibility that the administration could undermine California’s vehicle emission standards.

Schwarzenegger is on safe ground criticizing Trump from California, a Democratic-heavy state that overwhelmingly went for Hillary Clinton in November. The state Senate on Monday afternoon was planning to take up a resolution condemning Trump’s immigration order.