Azerbaijan is an investment - attractive country 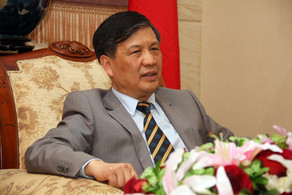 Ambassador Extraordinary and Plenipotentiary of the People’s Republic of China to the Republic of Azerbaijan Wei Jinghuahas received the delegation headed by President and Editor-in-Chief of Caspian Energy International Media Group Natalya Aliyeva.

Axar.az informs citing to Report, prospects of expansion of the Information Cooperation between Mass Media of Azerbaijan and China, including cooperation with Caspian European Club (Caspian Business Club), Caspian American Club and Caspian Energy International Media Group were discussed in the course of the meeting.

The Ambassador has expressed his gratitude to the Club for the efforts made to strengthen relations of China with the Caspian countries. “We, as the embassy, are ready to continue and strengthen cooperation with you”, he emphasized. At the same time Wei Jinghuanoted that “mutual understanding between our businesses is insufficient and the volume of information that Chinese and Azerbaijani businessmen get about each other is small”. In this regard, the Ambassador expressed hope that CEIBC could play a more active role in mutual familiarization of the Chinese businesses with those of the Caspian countries, which will let expand cooperation and implement a much higher amount of joint projects. “Chinese Company CNPC has established a close cooperation as it has been operating in Azerbaijan for a long time. But at present the company enjoys much better conditions and is ready to develop a long-term strategic plan of cooperation with such Azerbaijani partners as SOCAR”, the Ambassador emphasized.

According to him, in the coming years the Embassy would like to promote mutual visits of officials of Azerbaijan and China in order to deepen and expand business cooperation between the two countries in different areas”, he continued.
The Ambassador noted that Azerbaijan is an investment-attractive country for Chinese companies and “of course noteworthy is the big role of the historical visit made by President Ilham Aliyev to China in December 2015 in the course of which a memorandum of cooperation on Great Silk Way was signed. “It is a very firm foundation for further cooperation between our companies”, the Ambassador emphasized.