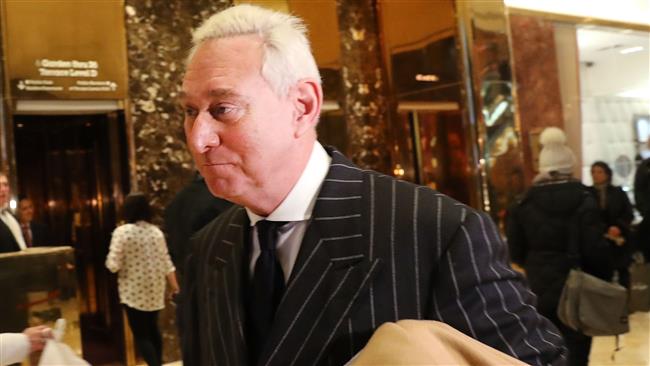 A former campaign adviser to President Donald Trump has acknowledged that he had private conversations with a hacker involved in the cyber attack against the Democratic National Committee.

“It was so perfunctory, brief and banal I had forgotten it,” Roger Stone told the Washington Times on Friday, referring to an exchange of messages on Twitter with a hacker nicknamed Guccifer 2.0.

The US intelligence community believes that Guccifer 2.0 is likely a cover identity for hackers directed by the Russian government, and that their cyber intrusion was aimed at interfering in the 2016 presidential election in favor of Trump.

Stone insisted that the conversations were “completely innocuous.”

Guccifer 2.0 has said its operatives targeted Democrats during the election last summer. The hacking group, however, has denied having any links to Russia.

Stone, a longtime confidant of Trump, wrote an article for Breitbart News in August, saying he believed Guccifer 2.0 was responsible for the DNC breach.

In one of the tweets on August 14, Stone said he was “delighted” that Twitter had reinstated the hacker’s account after it was temporarily suspended.

“wow. thank u for writing back, and thank u for an article about me!!! do u find anything interesting in the docs i posted?” Guccifer 2.0 wrote to Stone.

“I’m pleased to say that u r great man. please tell me if i can help u anyhow. it would be a great pleasure to me,” the hacker said in an August 17 message.
In the run-up to the 2016 election, WikiLeaks kept releasing batches of emails from the campaign of then Democratic nominee Hillary Clinton, as well as the Democratic National Committee.

The whistle-blowing website said on Tuesday that it had obtained and published thousands of documents from the Central Intelligence Agency that reveal its hacking and spying secrets.

One section titled “Umbrage” details the CIA’s ability to impersonate hacking techniques used by operatives based in Russia and other countries.

In theory, the hacking technique would enable US hackers to fake digital forensic fingerprints to make the Russians look guilty of infiltrating the Democratic organizations such as the DNC.

The new Republican administration has come under increased pressure following revelations that several of Trump’s senior aides had contacts with Russian officials.

Attorney General Jeff Sessions was accused last week of not disclosing his meetings with Russia’s ambassador to the US last year.