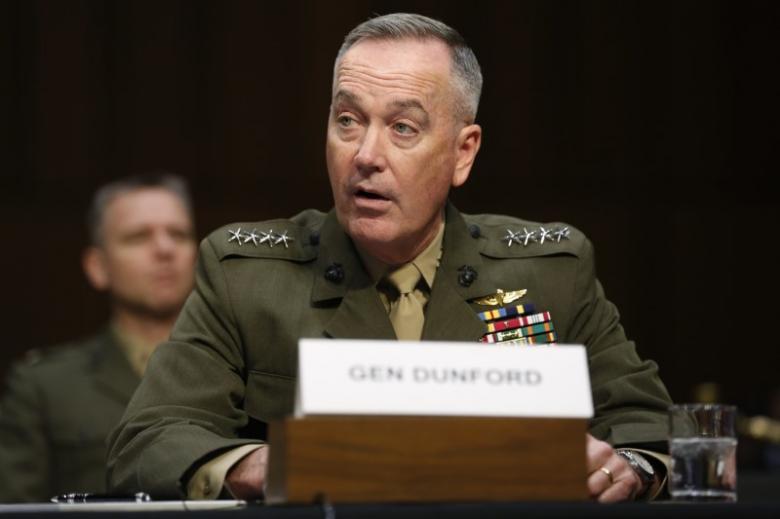 The U.S. and South Korean military chiefs warned on Tuesday that North Korea could "conduct provocative actions" in response to large-scale joint drills between the two countries, as China's premier also said tensions could lead to conflict.

"The chairmen recognized the possibility that North Korea could conduct provocative actions during the Key Resolve/Foal Eagle exercise, or in connection with North Korean major political events in April," a statement from Chairman of the U.S. Joint Chiefs of Staff General Joseph Dunford's office said, referring to the U.S.-South Korean military exercises.

The statement said the two military leaders "discussed response options" during a call that lasted about 30 minutes.

North Korea fired four ballistic missiles into the sea off Japan earlier this month in response to annual U.S.-South Korea military drills, which the North sees as preparation for war.

South Korean and U.S. troops began the large-scale joint drills, which are billed as defensive in nature, on March 1.

The exercise last year involved about 17,000 American troops and more than 300,000 South Koreans. South Korea has said this year's exercise would be of a similar scale.

China is isolated North Korea's sole main ally but has been angered by Pyongyang's repeated nuclear and missile tests. However, it has also said Washington and Seoul have a responsibility to lower the temperature and that talks are a better way to resolve disputes.

Chinese Premier Li Keqiang said on Wednesday the situation on the Korean peninsula and more broadly in northeast Asia had become quite tense.

"Tensions may lead to conflict, which would only bring harm to all the parties involved," Li said at his annual news conference in Beijing.

"So what we hope is that all the parties concerned will work together to de-escalate the situation, get issues back on the track of dialogue and work together to find proper solutions," he said. "It's just common sense that nobody wants to see chaos on their doorstep."

"The combined defense posture is firm regardless of the political situation in Korea," the statement quoted Dunford as saying.