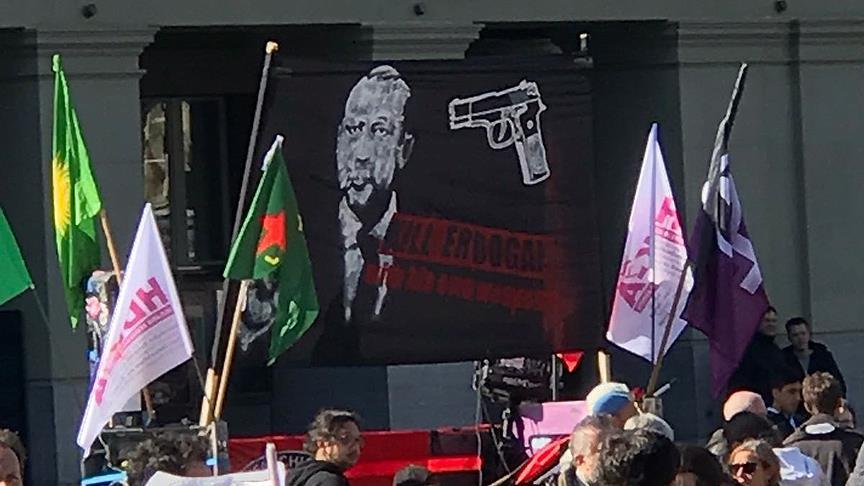 Istanbul prosecutors Monday launched an investigation into a weekend rally by the terrorist group PKK in Switzerland.

The Saturday rally controversially featured a large banner with a picture of a gun pointed at the head of Turkish President Recep Tayyip Erdogan and the words “Kill Erdogan”.

The people who attended the rally outside the Federal Parliament in the capital Bern will be held accountable for the banner, said the source, who asked not to be named due to restrictions on speaking to the media.

Possible charges include being a member of terror organization, insulting the president, and promoting terror propaganda, the source added.

The participants in the rally are presumed to be Turkish citizens and could face justice if they return to Turkish soil.

The move by Istanbul prosecutors followed Swiss authorities themselves also opening a probe into the rally.

Reto Nause, an official in Bern, confirmed a criminal investigation into the rally.

Nause told reporters that local authorities are taking action since the rally did not meet the conditions of its permit.

Some 250 PKK members and supporters participated in the gathering.

Of the rally, Erdogan said Sunday: "It is very interesting indeed that this terrorist organization is taking to the streets hand in hand with their [Switzerland's] leftist parties."

The president was referring to the Social Democratic Party of Switzerland (SP) and the Swiss Green Party which supported the rally, which saw no police intervention despite the banner calling for Erdogan's death.

The rally was also attended by supporters of the far-left terrorist group DHKP-C, and the terrorist YPG, the armed wing of the PYD, the terrorist PKK’s Syrian offshoot.

Turkey's Foreign Ministry Saturday summoned the Swiss counselor in Ankara to convey the government's reaction to the rally, as Ambassador Walter Haffner was out of town. Haffner was summoned Sunday.

In a joint statement Sunday, several Turkish NGOs in Switzerland condemned the local authorities’ handling of the incident.

The rally and the controversial banner “inconsolably saddened the Turkish community living in Switzerland,” the statement said, calling for accountability for those involved.

It has since been responsible for the deaths of approximately 1,200 security personnel and civilians, including women and children.