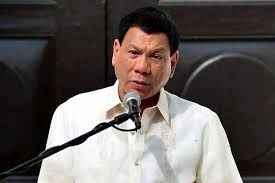 Philippines' President Rodrigo Duterte is facing another impeachment complaint, this time accusing him of forsaking the nation’s interests in favor of currying favor with China.

Duterte already faces an impeachment rap filed by Rep. Gary Alejano earlier this month for alleged killings linked to his war on drugs and allegations he has secret bank accounts.

Alejano's additional complaint accuses Duterte of "failing or refusing" to assert the country's exclusive sovereign rights, maritime rights, and territorial claims over disputed territories with China, namely Benham Rise and Panatag Shoal and the rest of the West Philippine Sea, according to GMA News Online.

"The president has taken a defeatist stance and openly signaled China to go ahead with whatever it intends to do in the West Philippine Sea," ABS-CBN quoted Alejano as stating in his complaint.

Alejano, a former military junior officer, said Duterte set aside a tribunal ruling that junked China's expansive claims to the contested sea, had stopped joint maritime patrols with the U.S., and made strong overtures towards China and Russia.

He said Duterte's actions amounted to a betrayal of public trust, culpable violation of the Constitution, and dereliction of duty.

According to him, the president has set aside the national interest in exchange for economic privileges from China, including the lifting of restrictions on fruit exports from the Philippines.

An international tribunal ruled in favor of the Philippines last year but Duterte refused to exercise the ruling as he sought to rebuild ties with China.

But House Speaker Pantaleon Alvarez, a close political ally of Duterte, said the impeachment would not succeed, as the House of Representatives is dominated by the president's allies.

In a statement to reporters, Salvador Panelo, the Malacanang Palace's chief presidential legal counsel, also dismissed the filing as “nonsense geared for propaganda and publicity” for Alejano.

In his first impeachment complaint, Alejano cited alleged culpable violation of the Constitution, bribery, betrayal of public trust, graft and corruption, and other high crimes as grounds for Duterte's impeachment.