May, King of Jordan discuss terrorism and relations 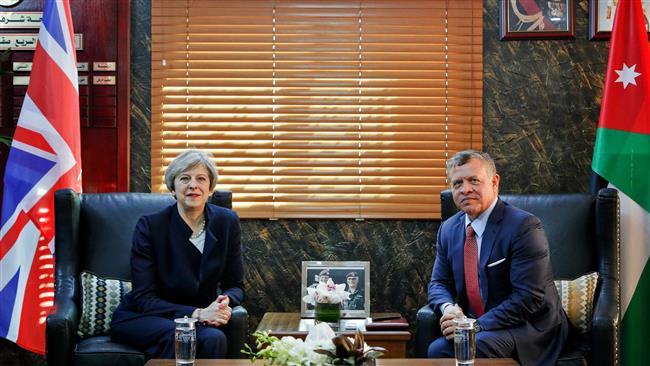 British Prime Minister Theresa May and Jordan’s King Abullah II have met in the kingdom’s capital of Amman, discussing terrorism and cooperation on various levels in the wake of Britain’s withdrawal from the European Union.

May met Abdullah shortly after arriving in Amman on Monday, kicking off a three-day tour to the region aimed at expanding ties with Jordan and Saudi Arabia.

May and Abdullah also discussed the ongoing conflict in Syria and the fight on terror.

The Jordanian king condoled May on the recent terror attack that killed four in hurt dozens in London and condemned the “cowardly” move, the report added.

May thanked the monarch for what she called his contributions to achieve peace and stability in the Middle East.

Jordan has been actively contributing to the US-led coalition’s airstrikes against alleged Daesh (ISIL) positions in Iraq and Syria since 2014, which have failed to yield a meaningful outcome despite heavy civilian casualties.

The country is also participating in Saudi Arabia’s ruthless airstrikes against Yemen, an unprovoked war that has killed thousands of civilians and has destroyed the impoverished country’s infrastructure.

Earlier, it was reported that May would announce the deployment of the British military trainers in Jordan to train the kingdom’s air force.

After the meeting, May and Abdullah visited Command of the Rapid Response Unit (RRU) and were briefed on the training courses implemented within the framework of a joint military training and cooperation program between the two countries.

May also met with her Jordanian counterpart, Hani Mulki as well as the country’s Chairman of the Joint Chiefs of Staff Lieutenant General Mahmoud Abdul Halim Freihat.

Mulki echoed Abdullah’s views on a range of topics and emphasized on the “centrality” of the Israeli-Palestinian conflict and the importance of the two-state solution, according to Petra.

May was expected to arrive in Saudi Arabia on Tuesday.

Before leaving the UK, May told reporters that it was in London’s interest to bolster ties with Amman and Riyadh.

“It is clearly in the UK's security and prosperity interests to support Jordan and Saudi Arabia in tackling regional challenges to create a more stable region, and in delivering their ambitious reform programs to ensure their own stability,” she said.