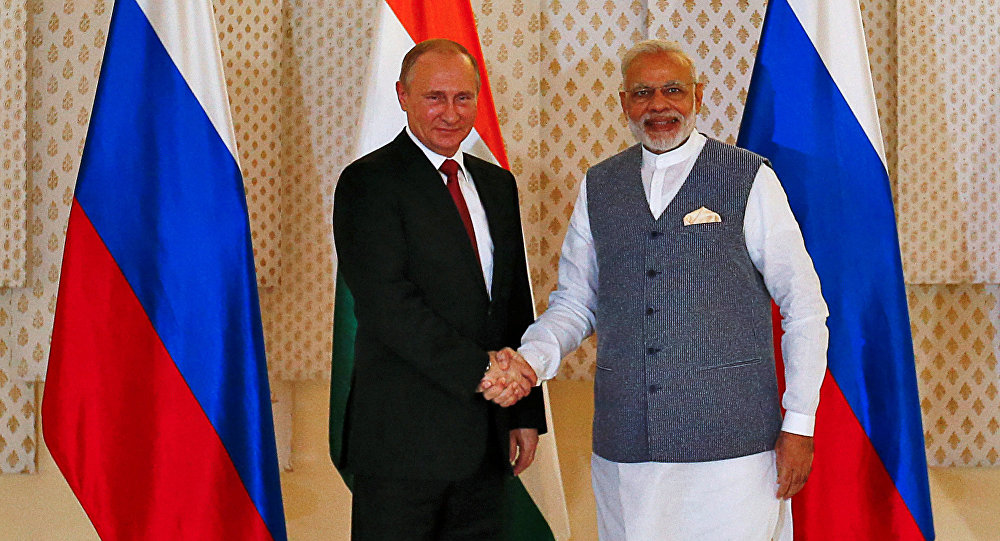 India and Russia are expected to carry forward their talks on a proposed free trade agreement involving the Eurasian Economic Union during Russian President Vladimir Putin and Indian Prime Minister Narendra Modi’s meeting on June 1. A formal joint statement after the Modi-Putin Summit is likely.

New Delhi (Sputnik) – The Russia-led Eurasian Economic Union (EAEU) comprises Belarus, Armenia, Kazakhstan and Kyrgyzstan. The free trade agreement (FTA) is expected to harness the trade potential between India and the five EAEU countries, including Russia, from the current US$11 billion to $37 to 60 billion in a span of less than a decade. India and Russia alone are hoping to take their trade volume to $30 billion by 2025 as aimed by President Putin and PM Modi.

India and the EAEU have already completed a joint feasibility study, which has been accepted by all countries involved as well as confirmed by a senior official in the Indian Department of Commerce in February.

“With the joint feasibility with the Eurasian countries accepted by all individual countries, trade negotiation would start soon with all countries in the group," Sunil Kumar, Joint Secretary, Department of Commerce in India’s Ministry of Trade and Commerce, said during the second edition of the CapIndia 2017, a trade exhibition.

During negotiations, India is expected to oppose the inclusion of e-commerce in the FTA as proposed by the joint feasibility study, which has recommended to kick-start negotiations for the FTA between India and the EAEU. And there is considerable difference between the two sides on e-commerce although both sides agree that it is a sector that is fast growing.

“Such legal framework would increase trade, streamline business, bring an element of certainty to cross-border commercial activities and allow to reduce delays and costs at the border. It is the driver in the modernization of administrations,” the study said.

The EAEU wants the creation of a common legal framework to govern e-commerce sector and related transactions, but Indian viewpoint is that the sector is still in its nascent stage and it wants to retain discretion to frame rules for the sector in future.

Domestically, India allows 100% foreign direct investment (FDI) under the automatic route in business-to-business (B2B) platform. No FDI is allowed in business-to-consumer (B2C) platform. Likewise, India allows 51% FDI in multi-brand retail to allay the concerns of small businesses which form the support base of the current BJP government. India is also not keen to provide market access on e-commerce at the multilateral level.

India’s overall position on rules governing the e-commerce sector is consistent with its position and Trade and Commerce Minister Nirmala Sitharaman had earlier clarified the country’s stance in this regard.

“Every country is having a big churn in e-commerce and technology is fast developing. It is not feasible to regulate or define e-commerce in a proper way given the evolving nature of the sector at present,” PTI quoted her in February after a meeting with World Trade Organization chief Roberto Azevedo.

Experts said the $30 billion trade target is realistic between Russia and India and paves the way for further expansion in future.

“Both India and Russia should easily achieve this target and in fact, should have achieved it earlier given the potential. There are multiple sectors where we have convergence beyond the traditional sectors such as gems and jewelry, oil and gas, aerospace and even defense can be leveraged at the private sector level,” Ashok Sajjanhar, former ambassador to Kazakhstan and a career diplomat, told Sputnik. He is currently secretary of the National Foundation for Communal Harmony.

The EAEU’s GDP amounts to $2 trillion and is a market of 182 million people. But it accounts for a little over 3% of global GDP. The EAEU is hoping to expand its share in world trade through a series of FTAs with like-minded countries. It has already successfully formalized such an agreement with Vietnam, while working on similar agreements with Serbia, Singapore, Israel and India, as well.