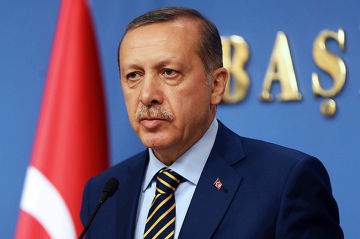 President Recep Tayyip Erdogan has said he will conduct a trilateral teleconference call with French President Emmanuel Macron and the Emir of Qatar Sheikh Tamim bin Hamad Al Thani on June 13 regarding the resolution of the Qatar diplomatic crisis.

The president also denounced the isolation of Qatar as "inhumane and against Islamic values", and said the methods used against the Gulf state were unacceptable, and analogous to a "death penalty".

"A very grave mistake is being made in Qatar, isolating a nation in all areas is inhumane and against Islamic values. It's as if a death penalty decision has been taken for Qatar," Erdogan said.

"Qatar has shown the most decisive stance against the terrorist organisation Islamic State of Iraq and the Levant alongside Turkey. Victimizing Qatar through smear campaigns serves no purpose."

He also urged the Saudi King, as the elder statesman in the Gulf region, to take the lead to resolve the crisis.

Speaking in the parliament ahead of Erdogan's speech to lawmakers from his ruling Justice and Development Party (AKP), Cavusoglu said the two leaders would hold a phone call to discuss the issue.

Saudi Arabia, the United Arab Emirates, Bahrain and Egypt cut diplomatic and transport ties a week ago, accusing Doha of backing terrorism. The sanctions have disrupted flows of imports and other materials into Qatar and caused many foreign banks to scale back their business with the country.

A number of nations, including Turkey, had been engaged in intense diplomatic efforts to find a solution to the crisis between Qatar and a group of Arab countries led by Saudi Arabia and Egypt.

The president had previously spoken by phone with the leaders of Qatar, Russia, Kuwait and Saudi Arabia in a bid to ease the row.

He had also vowed to keep supporting Qatar and said the dispute should be resolved before the end of the holy month of Ramadan.